Home » Get to know your Education Committee 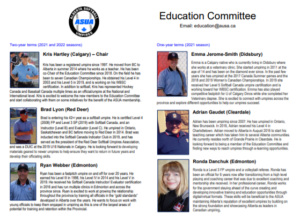 Get to know your Education Committee

Kris has been a registered umpire since 1997. He moved from BC to Alberta in summer 2014 where he works as a teacher. He has been co-Chair of the Education Committee since 2018. On the field he has been to seven Canadian Championships. He obtained his Level 4 in 2003 and his Level 5 in 2019, and is working on his WBSC certification. In addition to softball, Kris has represented Hockey Canada and Baseball Canada multiple times as an official/umpire at the National and International level. Kris is excited to welcome the new members to the Education Committee and start collaborating with them on some initiatives for the benefit of the ASUA membership.

Brad is entering his 42nd year as a softball umpire. He is certified Level 4 (2008) FP and Level 3 SP (2019) with Softball Canada, and an Instructor (Level B) and Evaluator (Level C). He umpired in Ontario, Saskatchewan and BC before moving to Red Deer in 2014. Brad was inducted into the Softball Canada Indicator Club in 2019, and has served as the president of the Red Deer Softball Umpires Association, and was a DUIC at the 2019 U16 Nationals in Calgary. He is looking forward to developing materials geared to newer umpires to help ensure they want to return in future years and develop their officiating skills.

Ryan has been a fastpitch umpire on and off for over 20 years. He earned his Level III in 1998, his Level IV in 2014 and his Level V in 2019. He received his Softball Canada Instructor/ Evaluator certification in 2016 and has run multiple clinics in Edmonton and across the province since. Ryan is excited to work at growing the relationship throughout the province by training all officials in the “gold standards” developed in Alberta over the years. He wants to focus on work with young officials to keep them engaged in umpiring as this is one of the largest areas of potential for training and retention within the Provincial.

Emma is a Calgary native who is currently living in Didsbury where she works at a veterinary clinic. She started umpiring in 2011 at the age of 14 and has been on the diamond ever since. In the past few years she has umpired at the 2017 Canada Summer games and the 2018 and 2019 Women’s Canadian Championships. In 2019 she received her Level 5 Softball Canada umpire certification and is working toward her WBSC certification. Emma has also played competitive fastpitch for U of Calgary Dinos while she completed her Veterinary degree. She is excited to connect with umpires across the province and explore different opportunities to help our umpires succeed.

Adrian has been umpiring since 2007. He has umpired in Ontario, New Brunswick. In 2016, Adrian received his Level 4 in Charlottetown. Adrian moved to Alberta in August 2016 to start his teaching career which has taken him to several Alberta communities. He currently resides north of Grande Prairie in Cleardale. He is looking forward to being a member of the Education Committee and finding new ways to reach umpires through e-learning opportunities.

Ronda is a Level 3 FP umpire and a volleyball referee. Ronda has been an official for 6 years now after transitioning from a high level playing and coaching career that was due to excellent coaching and mentorship she received. In her professional career, Ronda works for the government staying ahead of the curve creating and developing innovative training and education opportunities through digital/virtual formats. These skills will be beneficial to the ASUA maintaining Alberta’s reputation of excellent umpires by building on the strong foundation and showcasing Alberta as leaders in Canadian umpiring.