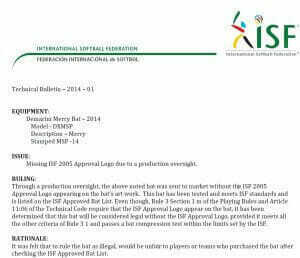 RULING:
Through a production oversight, the above noted bat was sent to market without the ISF 2005
Approval Logo appearing on the bat’s art work. This bat has been tested and meets ISF standards and
is listed on the ISF Approved Bat List. Even though, Rule 3 Section 1 m of the Playing Rules and Article
11:06 of the Technical Code require that the ISF Approval Logo appear on the bat, it has been
determined that this bat will be considered legal without the ISF Approval Logo, provided it meets all
the other criteria of Rule 3 1 and passes a bat compression test within the limits set by the ISF